I took advantage of confinement to do more work on my mobile Spitfire cockpit that I intend to take round airshows, museums, exhibitions etc, so that people can get an idea on what it’s like to fly a Spitfire and who knows maybe convince a few more people to join us online.

The cockpit separates into two halves just forward of the seat, which allows the rear section to slide backwards for ease of access. Once closed up you get that rather “intimate” feeling of the Spitfire cockpit where there is just enough room for your legs and shoulders and where the main controls fall neatly to hand. 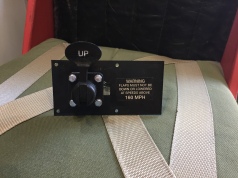 I haven’t skinned the fuselage yet, as I was busy designing, 3D printing and adding controls to make it more realistic in DCS, such as the starter & booster buttons, main fuel tank cock, auxiliary fuel tank cock & jettison handle, standard 5C/543 switches for the electric fuel pump, pitot heat and automatic radiator control, plus flaps operating lever – I needed the space to work and run cabling etc. God knows how the fitters of the time managed to squirm around this confined space even with the pilot’s seat removed. I can’t imagine the hassle if they dropped a nut or washer in the bottom of the floor-less cockpit. I am still working on prototype wobble pump and ki-gass engine primer to get them to work with DCS.

In the middle of all this I got a request to make up a pair of two tread Spitfire pedals to adapt onto a specific commercially available rudder pedal base. This took some time to re-design from original SAW drawings and then to adapt for the particular pedal unit dimensions. But we got there – only 10 hours 3D printing for each pedal !!! By the way the one’s shown in the heading photo of the cockpit aren’t mine and I need to get round to fitting up a pair of my own model. 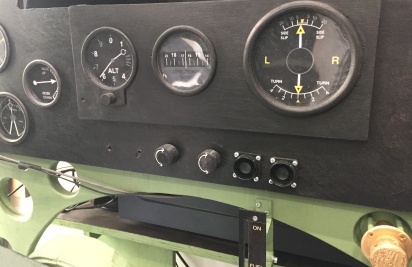 As you can see from the photo I had some fun making instrument facings to give more feel to the cockpit. I have decided to opt for track IR and a large-ish screen rather than VR, as I have reports that quite a lot of visitors who aren’t used to them get motion sickness. Using track IR meant that I had to make a cut out in instrument panel and later on in the fuselage shell. For public use the small mouse table will fold away and the keyboard is replaced by instrument facings from the lower blind flying panel.

Since I had designed and tested all these parts for my cockpit, I have decided to also make them available to flight simmers in addition to the basic left cockpit panel and control column plug & play sets that I already make to order. I will soon be adding a catalogue on my website for these new parts, which can for the most be added on to existing sets or installed in personal build cockpit projects.

Topsy is fairly new to multiplayer on-line flight simulation and earned his "wings" in mid 2016. He still gets shot down too easily, but is slowly getting better. In February 2017 he started his Spitfire sim project in an effort to create flight controls that look, feel and operate like the real thing. The protype was successfully flight tested in October. By popular demand he now builds kits for other pilots. For details visit Spitfire Histories FB or his website www.spitfirehistories.com View all posts by Topsy