DCS have just released the clipped wing “CW” version of their LF MkIXc and at last we can load bombs and external drop tanks to the aircraft.

Unlike IL2 where clipped wings is an option in the load out menu, in DCS the clipped wing Spitfire is a specific aircraft type, so it must be made available as such in the mission assets. This creates a slight restriction for mission planners as you need to decide in advance how many of each type of Spitfire you place in the game set.

Two of us from EAF flew the CW on the Normandy map last night, without noticing any particular performance differences between the standard wing and CW versions. I later did some aileron roll tests with a very non scientific method which consists of flipping the spade grip fully left or right at 240 MPH and counting the time to complete a 360° rotation. It does seem that the CW is about 1 second quicker, but that’s maybe because I want to believe. I was a bit surprised to note that the rotation rate seems to be the same both left and right in both versions. I would expect a left hand roll to be slightly faster due to the Merlin’s clockwise propeller rotation.

On the load out panel we only have the 250lb bombs on the outer wing hard points. On the ventral position there is a choice of a 500lb bomb or 45 gal drop tanks. What is nice is that both types of drop tank are available the “slipper” conformal type and the torpedo type, which can be seen in many photos of Spitfires at the time of the Normandy landings. So at least in DCS we have historically correct load outs.

The bomb and torpedo tank racks are finely modeled and seem more realistic than those offered on the IL2 Battle of Bodenplatte MkIXe.

I did a quick offline bomb run at an empty field to see the damage effect and noted that on pressing bomb button all three bombs are released, but seem to make only one big hole. I did make a shallow dive and late release, so this may account for the grouped effect. I need to “gen up” a bit to see if there is a way to release wing and ventral stores separately.

Talking of damage models, DCS have made vast improvements on the original “flaming wings” effect. During a sortie on the Storm of War server last week I took some hits from flak in my starboard wing which are now quite nicely modeled, with tear holes in the panelling reveling the internal wing structure. In the photo although the damage appears to be near the aileron control horn, I was able to bring this one home. 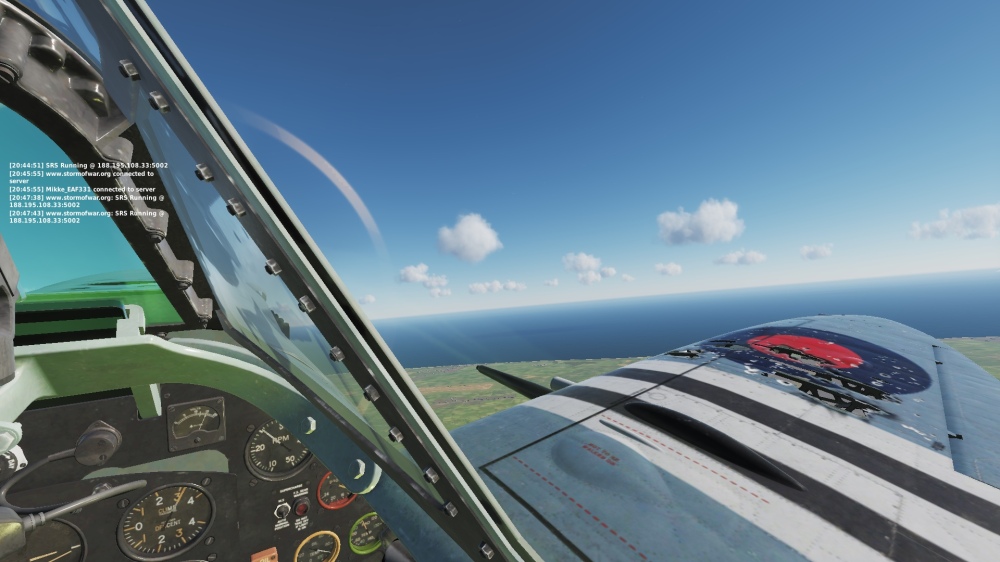 So all in all we now have Spitfires that can also make some contribution to the ground attack role typical of post D-Day 2nd TAF missions in both the DCS Normandy  and IL2 Bodenplatte maps. As I said a real treat for Spitfire fans.

Topsy is fairly new to multiplayer on-line flight simulation and earned his "wings" in mid 2016. He still gets shot down too easily, but is slowly getting better. In February 2017 he started his Spitfire sim project in an effort to create flight controls that look and feel like the real thing. The protype was successfully flight tested in October. By popular demand he now builds kits for other pilots. For details visit Spitfire Histories FB or his website www.spitfirehistories.com View all posts by EAF79_Topsy